Tinker Bell was just a typical adorable tricolored Cavalier King Charles Spaniel, not to be confused with the much smaller snub-nosed King Charles Spaniel, or, as often happens, the Cocker Spaniel. She is also occasionally confused with Jim Henson’s Muppets. It’s not common but it happens. She was not nearly as dainty as the name her breeders gave her would suggest. She was a small dog, destined not to exceed 20 pounds, though she was very curious and adventurous even as a puppy. She was the first in her litter to exhibit any signs of intelligence but was also prone to fits of wild exuberance and a slave to her spaniel nature. She often exhibited a strong prey drive and an overwhelming desire to chase things.

When Abby first saw Tinker Bell she was immediately smitten. Abby, being ever logical and rational, still took over an hour and a half to decide which puppy she wanted. The loneliness she carried around with her cried out to be squelched, so Abby, in a further attempt to assimilate to Earth and its customs, decided to indulge herself in the strange Earth ritual of owning another life form. At first, the thought was repulsive, but her solitude wore her down and she began researching pets. Throughout her research, she was drawn to the Cavalier King Charles Spaniel’s flowing fur and calm demeanor. She continued to explore other species but kept returning to the Cavalier King Charles Spaniel. She finally acquiesced to her growing desire and contacted a reputable breeder who could provide exemplary health and lineage records.

At first, the breeders were hesitant to sell one of their fine specimens to an alien. Abby initially neglected to inform them of her extraterrestrial status when she first called them. When she offered to repair a low hum their stereo was chronically making, they asked her to fix a laptop. After making quick work of a long list of technical repairs, the breeders hardly minded all the pink fur Abby left on their couch. As dog breeders, they were used to black, brown, and white fur interwoven with everything, but this pink fur was disconcerting. By the time all the repairs were done, the breeders had come to know Abby a little and had actually grown to like her. They decided she was the kind of person to whom they would feel comfortable selling a dog.

Abby finally got to meet all six members of the litter. She sat on the floor with them and they mobbed her, sniffing and licking and rubbing and crawling all over her. Abby was taken aback by the greeting she received. She was not remotely prepared for it. After a few moments of hesitation, she decided she liked being playfully mauled by these tiny creatures. Getting a pet was the right decision.

The first thing Abby did when she got Tinker Bell home was change her name to Charlie, Charlie the Cavalier King Charles Spaniel. She thought she was being clever. Sometimes even those who are geniuses can be banal when to attempting creativity. She also failed to realize that Charlie isn’t a girl’s name. From there she moved along to getting all her shots and starting training.

As mentioned above, Charlie was very smart. She took to her training like a bee takes to bumbling. I don’t know what that means, either. She learned quickly. Abby was so proud of her little Charlie Belle, she brought back the Bell when she learned that Charlie isn’t a girl’s name and added the extra ‘e’ to make it feminine instead of a potential surname. Charlie was so well behaved that Abby started bringing her to her squad training. When Captain Grek found out, he forbade it. Abby was so distraught that she nearly quit the Refugee Allied Defenders (R.A.D.). She started spending less time training with the R.A.D. and more time training Charlie.

Concerned with her repeated absences, Hitch came to Abby to find out what was happening. Abby explained and Hitch flexed his growing leadership skills. He told Abby how much the squad needed her and how important she was to the R.A.D., even if the others couldn’t see it. He promised that if she recommitted herself to the squad they could make Charlie their official squad mascot. Abby reluctantly agreed. Hitch was still her best friend and the only friend with whom she could actually communicate.

The new arrangement actually made Abby feel lonelier. She was spending more time away from Charlie as she was always training. As captain of a squad, Hitch had his new responsibilities, which kept them from doing all the fun things that made them friends back on Nasga. It didn’t matter that he dragged her away from her important work to go play. Abby was torn between her responsibilities to her squad and her responsibilities to Charlie. Her loneliness was steadily increasing.

One sleepless night, while lying in bed with Charlie curled up on her chest, Abby had an idea. She remembered an invention she was working on on Nasga. It was a machine that would imbue animals with Yamfennianesque qualities. If it worked, she could instill in an animal the ability to speak English, walk upright on two legs and hold things in its newly formulated hands. Said animal would be able to think and communicate like a Yamfennian. She could anthropomorphize Charlie. She jumped out of bed, which was terrifying for Charlie who was still on her chest before being flung onto the bed and subsequently bounced to the floor. After apologizing to and calming Charlie, Abby headed straight to her workshop and got to work.

Following a few failed experiments, which lead to an enormous rat, a turtle that failed to grow or gain any noticeable intelligence, but loved pizza, an ant who would only communicate via Twitter, among various other mutations, Abby was ready to try it on Charlie. Abby closed her eyes, crossed her fingers, rubbed her foot, that’s considered good luck on Yamfenn, aimed the beam from her machine at Charlie and pressed the button. The smell of smoke and burning hair arose in the workshop. Terrified, Abby opened her eyes, but couldn’t see anything through the cloud of smoke. After a brief pause, she heard a cough. Abby frantically swatted at the cloud of smoke attempting to get it to dissipate. From somewhere in the cloud she heard, “I’m glad I didn’t end up like those other blokes.” Elated, Abby ran into the cloud of smoke, found Charlie and wrapped her arms around her.

It worked. Abby had actually created a device that could anthropomorphize an animal. Charlie was now officially a sentient being. Well, she was already a sentient being. She was a… a… a person. She could now walk upright on her hind legs. She had hands instead of paws. Well, they were hand shaped paws. She could talk. Most importantly her intelligence level was now Yamfennianesque. She wasn’t as smart as Abby, but she would make a serviceable assistant and a friend.

There was one side-effect that Abby would have to fix if she ever attempted to anthropomorphize anything again. Charlie developed a disturbing affinity for puns. Abby wasn’t sure if it was something in Charlie’s nature, something caused by the device, or something Charlie picked up watching television. She was sure she was going to have to train it out of her.

In the morning, after staying up all night talking to Charlie, Abby called Hitch. She had to share this amazing news with her best friend. Now, she had two best friends and she wanted them to be best friends. Hitch was amazed and speechless. It’s a good thing Charlie could talk now or the conversation would have run quite dull. After Abby explained everything to him, Hitch panicked. He told her that she had to keep this a secret. If anyone ever found out, she would be in big trouble and her invention would be confiscated.

Abby explained that she went a different route. She hacked into R.A.D.’s computer system and enrolled Charlie into R.A.D. Hitch could only slap his forehead. Abby went on to explain that she retroactively added Charlie to the manifest of their escape ship as a passenger, so it would appear as if she had been with them since Nasga. Anyone who doubted her legitimacy need only check the records. Charlie was now a refugee Niibellian from the planet Niibell. Abby had to hope nobody did further research because it wouldn’t take much to learn that Niibell doesn’t actually exist. She couldn’t find a planet that was home to anthropomorphic dogs, so she made one up.

When Hitch assured her that someone would notice a new member of their squad Abby reminded him that no one outside the squad pays any attention to them. They’ve been deemed the dregs of R.A.D. and no one on any other squad even acknowledged them, except to taunt them. Abby’s recent inner turmoil and withdrawal made the L Squad’s performance drop even further, leading them to be labeled ‘hopeless.’ They could easily sneak in a new member without anybody outside the squad noticing. They only had to tell the squad. If anybody did notice they would all vouch for her and direct them to the records, which would support their assertion that she’s always been there. Hitch grudgingly agreed, but only because they were best friends who had traversed the universe together. Abby did save his life by sneaking him aboard their escape ship. The least he could do was let her have a dog.

Charlie’s training revealed that her transition to a fully anthropomorphic Cavalier King Charles Spaniel was not so full after all. While most of her intended transformations were amazingly realized, she did retain some of her natural instincts. Her spaniel instincts remained intact. All her training was still liable to be overridden by irrational spurts of excitement. She still loved chasing things and would often streak away after something, usually a rabbit, which Abby found disturbing.

Even when the L Squad was eventually sent out into the world for their, often mundane, missions, Charlie would have to be kept on a leash, which Charlie resented. She frequently tried to talk Abby out of making her wear her leash, but every time Abby relented Charlie would run off and end up in trouble. That only made more trouble for the squad, which got into enough trouble before the addition of Charlie. Now, Charlie’s leash is omnipresent on every mission unless she is given a specific task and it’s better for the mission that she is released.

If Charlie weren’t anthropomorphic and lived in your time this is what she might look like (Photos Courtesy Of Lavender Cavaliers):

This is what Charlie might look like if she had a different life and was on a bed with her Aunt Holly Rose and Uncle Paxton:

If she were on a log with her Aunt Holly Rose & Uncle Gizmo:

If her tongue were hanging to the side:

If she were Wilson from Home Improvement: 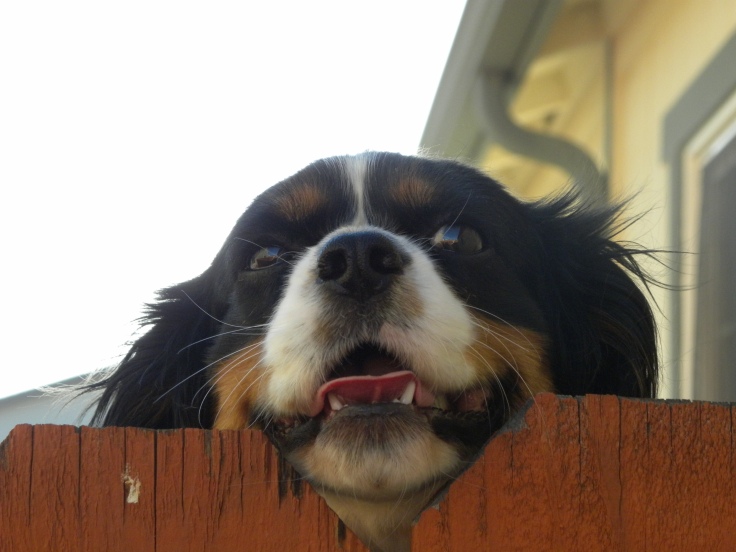 If she were forced to play dress-up as an elf and not happy about it: 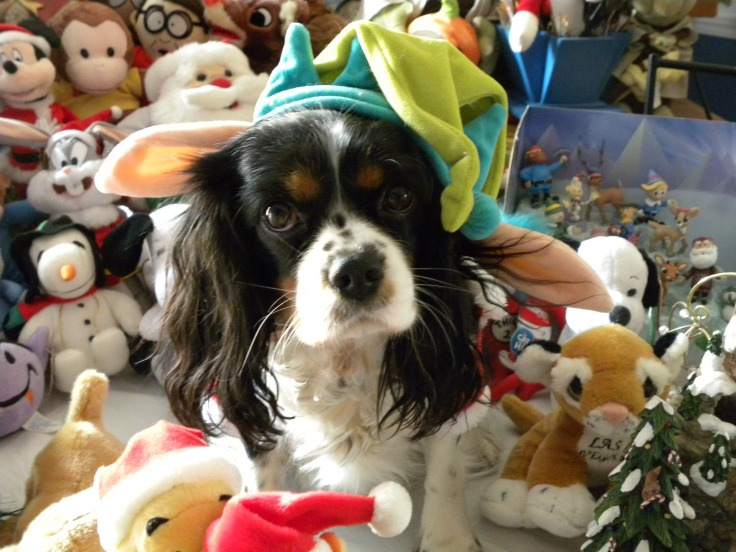 If she were forced to dress-up like Santa Chuck: 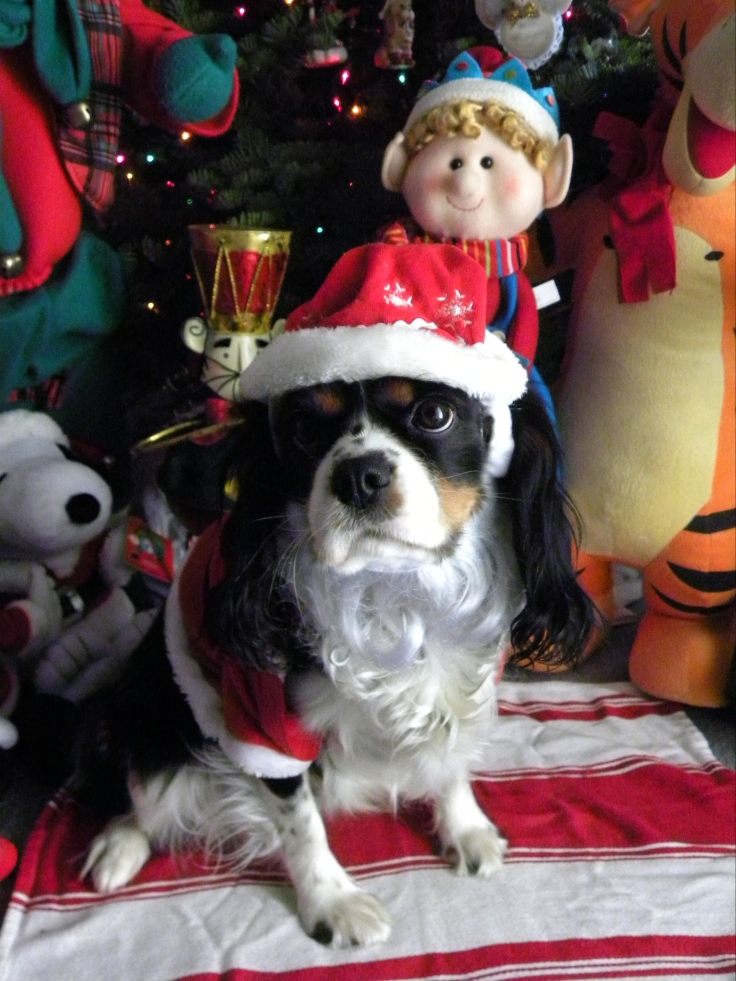 If she had a stick (or a stick blaster as in The L Squad: Phase Two):

(She looks kind of savage in this one.)

If she were babysitting: